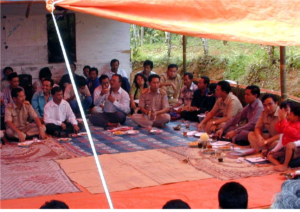 It is a 40,000 ha area, home to 100,000 people, with coffee (robusta) production as primary source of income, living in a huge old crater, with consequences for spatial variability of soil properties from various eruptions and lava flows. Adjacent to the Bukit Barisan mountain range that runs along the length of Sumatra island, the Way Besai river feeds one of Lampung’s main rivers. Coffee farming expanded here from start of 20’th century, but a large influx from Java (government sponsored + spontaneous migrants) led to a densely populated landscape. The river became the catchment for a hydroelectrical power plant, developed in the early 1990’s. This started the ‘issue’ that dominated the landscape from that time: evictions of coffee farmers from a ‘protection forest’ part of the landscape, motivated by concerns over water quantity and sediment load.

When ICRAF engaged in the late 1990’s, evictions had made it a ‘worst case’ example of conflict. The ‘action research’ here became the basis for a ‘Negotiations Support System’ approach (NSS), where three interacting knowledge systems (local, public/policy and science/modellers ecological knowledge – LEK, PEK, MEK for short) were charted, landscape-level scenarios were explored, as well as reconciliation/ negotiation processes were supported to turn an ugly lose-lose setting into a win-win. The solutions that emerged varied by landscape zone: community-forest management (HKM) agreements for the watershed protection forest, and a number of PES experiments and ES auctions on the private/village lands by the RUPES (Rewarding Upland Poor for the Environmental Services they provide) program. Now, nearly 20 years after the start of the engagement, the landscape has become a source of inspiration (aligned with the ‘Source of Wealth’ meaning of the name) for watershed management elsewhere in Indonesia.

You can find more information about Sumberjaya in the following page

We use cookies of our own and of third parties to improve our services and to be able to offer you, by means of web browsing analysis, the best options. If you continue browsing, we assume that you agree to their use. For further information, please click here.