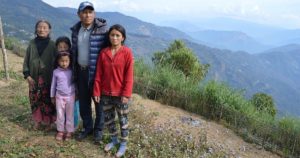 The Sikkim and Darjeeling Himalayas have a long-standing tradition of relationships between the local communities and the forests. Since independence, however, the government’s approach to the local people became mainly confrontational, leading to severe negative impacts in terms of conflicts between the local communities and the forest departments. Conflict has also led to the proliferation of the illegal trade in timber and other ecosystem goods and products. To understand how social-ecological systems can be managed and governed to generate a sustained supply of ecosystem services and support associated livelihoods without impairing key ecosystem properties and functions that are necessary for maintaining resilience in the face of land use and climate, we started to study the status of ecosystem services and whether the level of protection affected the access to key ecosystems goods and services upon which they were highly dependent, i.e., are they able to achieve a minimum level of wellbeing.

Our study was conducted in the fringe villages of the Singalila National Park and Senchel Wildlife Sanctuary. While Singalila National Park was established in 1992, Senchel (already a game reserve) was accorded a Wildlife Sanctuary status in 1986. While national parks are category II with the strict goal of conserving species, with restrictions on visitors to enter certain areas, wildlife sanctuaries are category IV which is “not as strictly protected from human use” as in National Park. While the higher altitude Singhalila cluster of villages remain isolated from the market and limited ability to capture ecosystem services such as pollination through agriculture, the mid-altitude Senchel cluster of villages are better connected to markets and have a multiple cropping system. A participatory approach was adopted to design our study and select study sites. Community level group discussions and stakeholder consultation workshops at the district level were held as an ex-ante activity of the project. This helped us learn about the level of dependence on ecosystem goods and services prioritize ecosystem services, perceived threats to ecosystems goods and services on which they were dependent. Participatory Rural Appraisal activities were used to identify the ecosystem goods and services that would be assessed. The outcome of these interactions revealed that clean and safe drinking water and fuelwood were the most important ecosystem goods. Key informants were identified from every community to help us stratify their forest ecosystem into resource rich, resource poor and reference forests based on the level of use and availability of ecosystem goods. Our assumption was that the availability and access to critical goods and services would directly or indirectly have a bearing on people’s wellbeing. However, in this study, as opposed to earlier ecosystem service assessments, we used the capabilities approach (Sen, 1999; Nussbaum, 2009, 2011) to assess wellbeing. Instead of using more material wealth-based approaches, we used a freedom and a rights based approach. Household level interviews were conducted that used semi structured open –ended questionnaires to understand their perceptions of the forest protection policies and impact on their lives, observations on forest condition change and change in availability of ecosystem goods and experiences of living in juxtaposition to a protected area.

Our study shows that although the forest protection policies were effective (increase in forest cover), community development was retarded and inadequately addressed. However, our interactions with the communities also revealed a sense of alienation from the surrounding forests. Their access to goods and services is highly monitored, often criminalized in some cases and completely dependent on opportunistic availability of critical goods.

Conference paper “Soubadra Devy M, Annesha Chowdhury, Vikram Pradhan, Abhishek Samrat and Sarala Khaling – Change in forest condition and its implications for the well-being of forest fringe community – a case study from the Darjeeling Himalayas” as part of the panel on Conservation and Social Justice: Valuing Capabilities in Interdisciplinary Socio-ecological Assessments in the eastern Himalayas – HDCA, 2017, Cape Town

We use cookies of our own and of third parties to improve our services and to be able to offer you, by means of web browsing analysis, the best options. If you continue browsing, we assume that you agree to their use. For further information, please click here.